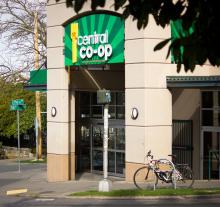 Central Co-op CEO Dan Arnett will leave at the end of the year to head up the Sacramento Natural Foods Co-op in California, but still has a lot of work on his plate he’d like to see cleared off.

With tensions high following Central’s merger with the now-shuttered Tacoma store and heated members-only meetings, not everyone will be sad to see Arnett leave.

Arnett, who has been CEO and served on the co-op board since 2012, announced his departure to members on Thursday, Sept. 1.

“It was really hard, because it’s such an unusual situation, and it’s easy to make a lot of speculation,” he said.

Arnett has been taking criticism since the closure of the Tacoma location in July, the co-op citing a leasing dispute as the cause. Central Co-op merged with the Tacoma Food Co-op after more than 93 percent of members voted in favor of it in late December. Members also approved shifting to a multi-stakeholder model.

Since the closure, Tacoma co-op members have been barred from meetings, trespassed from the former store site and blocked on Facebook for protesting Arnett’s leadership decisions and a perceived lack of transparency in regard to finding a new store site.

“It’s been interesting to have members of our community’s voices silenced,” said Gabriel Johnson, with the Friends of the Co-op in Tacoma, speaking about two members who had spearheaded protests and demands for more information about the Tacoma location’s closure. “Because the co-op was kind of closed under some weird circumstances, and there were just a lot of questions, and there wasn’t any transparency at all.”

Johnson attended a co-op community meeting last Tuesday, Aug. 30, which he said actually gave members an opportunity to weigh in, which left him feeling more optimistic.

“It’s nice to actually have some input and be heard,” he said, “because that wasn’t the case at the beginning.”

He said the consensus from that meeting was to find a new store location in Tacoma’s Hilltop neighborhood.

“We’re talking with some folks now,” Arnett said, “and I do believe we’ll get something.”

The Central Co-op CEO said issues with the Tacoma store made him second guess his departure, which he said was already in the works prior to the store’s closure.

“A lot of that conversation really predated what happened with Tacoma anyway,” he said about going to the Sacramento co-op.

Arnett said the Tacoma Food Co-op likely would have closed without the merger.

The need to find a new Tacoma store won’t stop Central Co-op from seeking to be the anchor tenant for the transit-oriented development project around the Capitol Hill light rail station, Arnett said.

“I love Central. I love Seattle so much; it’s bittersweet,” he said. “I think you just have to do what feels right.”