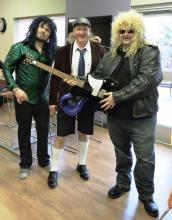 The pancake eating contest is an annual event at Greater Nevada Credit Union, which also has a team of Special Olympics Nevada Polar Plungers each year. Greater Nevada’s 2016 Plunge team theme is “Rock and Roll Extravaganza” and fundraising festivities, which began January 12, have included long hair wigs, shiny shirts, guitars and even a soda shop.

“Our staff is really into this fundraiser,” said Joyce Whitney-Silva, Greater Nevada EVP/CFO and Board Member of Special Olympics Nevada and Northern California. “The costumes are fun, the food is delicious, and it’s all for a good cause. There’s so much energy and comradery.”