Under the watchful eye of Apolonio Cortes and Abel Ruiz, a handful of shoppers picked at a selection of lettuce, green onions and other produce at the El Centro Cultural de Mexico community space in Santa Ana.

Across the room, a group of women showed off their display of handicrafts: jewelry and purses woven out of strands of recycled paper. Other vendors were selling cosmetics, T-shirts and other products.

The event, sharing the hallmarks of a typical community market, is held once a month by several immigrant-run cooperatives in a town where 80% of residents are Latino, nearly half are immigrants and many are struggling.

Cortes, for one, can no longer find work cleaning offices or moving furniture, so he was thankful for every head of lettuce sold, even at just a dollar.

“This is an opportunity to work in a different way — being an owner, being part of the group I’m in,” said the 59-year-old Mexican native.

Cortes and Ruiz are members of Cooperativa Tierra y Dignidad (Land and Dignity Cooperative), whose 15 members primarily do landscaping and catering jobs. In its second year, it’s the largest of the five ventures.

The jewelry and handbags were made and sold by Manos Unidas Creando Arte (Hands United Creating Art), a 2-year-old co-op formed by five women.

The others include Mano Prints, a maker of screen-printed T-shirts, and Producciones Santa Ana, which offers video and audio editing.

Long associated with the counterculture of the 1960s and ‘70s, the worker-owned and -operated businesses are experiencing a resurgence – and not just in Southern California. In 2015, the United States Federation of Worker Cooperatives estimated that there were up to 400 nationwide with total annual revenue around $400 million.

The federation traces the recent growth to a second wave of co-ops that began in the late 1990s, nurtured by veterans of the movement.

Local governments and advocacy organizations are now fostering the business model as a means to combat urban poverty and income inequality.

In California, advocates helped push a bill through the Legislature in August 2015 that established a legal framework for establishing and operating co-ops, giving them certain tax benefits. 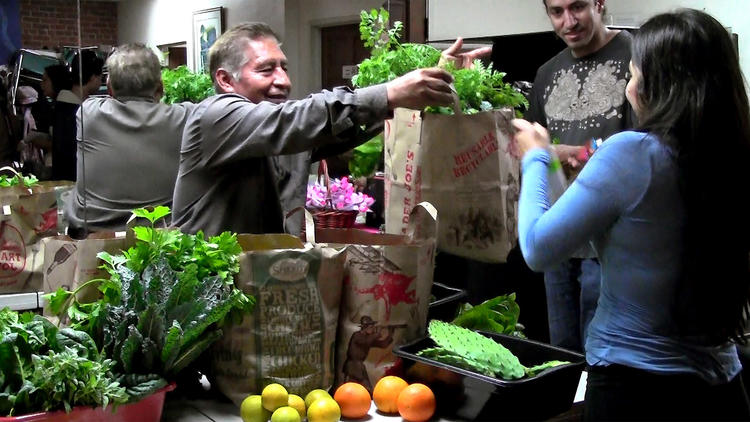 “Getting into the business world require a lot of know-how,” said Sandy Chiang, program manager for Healthy Communities. “We’re creating a curriculum so people know what business development looks like.”

Many of the Santa Ana co-op members earn far below the city’s median annual income of $52,519. They are part of the 22% of the city’s population who live in poverty, according to census data. Some are undocumented and can’t be legally hired.

Tierra y Dignidad member Araceli Robles is just barely getting by on her income doing community engagement work for a local nonprofit organization. Her husband is a metal polisher whose paychecks have sometimes bounced.

“Families survive on $10,000 income annually,” said Robles, 49, who lives in low-income housing in Santa Ana’s Lacy neighborhood. “Just two blocks away from where we live, people are seeing over $100,000 income annually. So there’s a great disparity.”

Chiang says gentrification was key in the California Endowment’s decision to support co-op development. “You’re seeing a lot of hipster joints popping up rather than mom-and-pop shops that have been the lifeblood of the community,” she said.

That gentrification is taking a bite out of families’ pocketbooks. In June, the median monthly rent for a Santa Ana apartment was $2,065, up 9.3% from a year earlier, according to real estate website Zillow. Rents have increased less sharply across Orange County, where the median rose 6.8% to $2,440.

The cooperatives are starting to make a difference in their members’ lives, even if the dollar amounts are small.

Tierra y Dignidad has brought in about $5,000 in revenue and about $7,000 in member contributions since it started. About $5,000 has been lent back to members who needed help making ends meet. (Members are encouraged to contribute $40 a month toward operations and capital formation. Other co-ops often require a monetary investment to join.)

This is an opportunity to work in a different way — being an owner, being part of the group I’m in.— Apolonio Cortes, who sells produce

A recent meeting of Tierra y Dignidad was typical of how the co-op works. A local girl was turning 15 and her mother needed catering services for the girl’s quinceañera. A call went out asking who could pitch in.

A few weeks later, five co-op members gathered in Robles’ kitchen to cook mole. The traditional festive sauce was served at the party, where eight members served and tended bar. The mother paid $600, 10% of which was invested back into the co-op, which hopes to start a credit union. The rest was split among the workers.

So far the co-op has catered 30 events, completed four landscaping jobs and sold four compost bins. It is also installing a backyard patio, jobs that have come from friends, colleagues and neighbors.

The group relies on the skills of members, which include cooking, construction and architectural design, but also a culture of collaboration.

Ruiz, who has a day job as an urban-agriculture coordinator at a social service agency, recalled watching his father take on extra gigs during his off hours.

“He would go to the parking lot and hang out with the neighbors,” the 32-year-old Tierra y Dignidad member said. “People would come up and say ‘Hey I need an oil change.’ My dad would be like, ‘OK, who’s down to help me?’ They would distribute the workload.”

While the co-ops draw on that heritage, they mark a graduation into the formal business world. Nonprofit advocacy organizations are helping them secure capital, receive English and financial-literacy training, and craft business plans.

Among the success stories is Beyond Care, a Brooklyn child care co-op that has grown to 41 immigrant Latina worker-owners since its founding in 2008.

“The co-op has completely changed how I was working before and how I work now,” said Rocio Morales, the co-op’s president, who used to earn $10 an hour cleaning houses and caring for children.

Now, she makes $17 an hour, with paid vacation and sick days. She’s also been trained in CPR, nutrition, and speech and occupational therapy.

Beyond Care was incubated by the Center for Family Life, a social service organization that has eight co-ops, mostly in the service industry in New York. Three others didn’t survive, which is not unusual.

In Los Angeles, Native Green, a co-op founded by a group of day laborers in 2010 to convert gardens into drought resistant green spaces, is now dormant.

Narro said the day laborers had good gardening skills but knew little about business, a big handicap considering all the competition they faced during the drought.

“I think Native Green did five houses when they started. But they were all friends of mine from the social justice movement,” he said. “My social-justice movement friends are not what’s going to make them competitive and succeed.”

Narro believes that immigrant-run co-ops would benefit from bringing in more folks who are “social activist minded but come from the private sector and know how to run a business.”

Cortes of Tierra y Dignidad is counting on the co-op thriving. He feels it represents his second chance at the American dream.

He left the southern Mexican state of Guerrero 20 years ago when he couldn’t find agricultural work. He settled in Santa Ana looking for a better life.

Cortes worked several jobs, including for a food transportation company and animal shelter that both stiffed him on his wages.

“I had two jobs and spent all of my time making money to pay rent,” he said.

He hopes the co-op will allow him one day to be his own boss, but it also represents something deeper.

It allows him to “rescue some of the values and traditions of my country,” he said. “It’s that sense of community and belonging and family.”